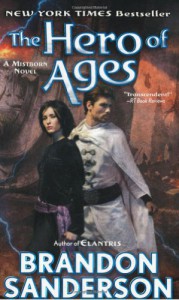 To those of you who have been following my updates and can now see my rating, it should be obvious that I was disappointed.

On one hand, Sanderson's reduction of his characters to virtually identical and unchanging archetypes as opposed to further developing them to distinguish them was unforgivable. Mistborn's characterization was slightly generic, but still quite varied and interesting, and so I'd anticipated that Sanderson would capitalize on the glimmers of potential he'd led me to expect would be fleshed out. The Well of Ascension suppressed those expectations somewhat, but I still trusted that Sanderson would at least manage to propel the characters' development along in some kind of direction, instead of halting it entirely and turning backwards into cliché.

What we have here in The Hero of Ages are people crumbling almost instantly under every imposition of duty and every obligation they feel to serve the people. Most of them seem to be losing whatever flimsy hold they already had on their identity. Despite Sanderson’s irritating wooden and expository way of articulating their internal struggles (honestly, even a practical exchange about freaking canal water could devolve into some angsty and solipsistic scene of characters mooning over their woes), this is altogether understandable. In the context of what Sanderson’s story symbolizes—a world driven to the edge of destruction in order to be reborn—it makes sense that the characters, too, would be pushed past their limits until they were nearly defeated.

What I don’t get is that those emotional conflicts are solved nearly as soon as they are introduced, then subsequently revived, then resolved again, and repeated over, until it feels like a soap opera manuscript copied and pasted multiple times. I kept flipping back and forth through the pages to make sure I wasn’t reading the same thing over and over again. Technically, I wasn’t. Given how redundantly written those conflicts were, however, I essentially was.

This problem is also notable in The Final Empire as well, but it’s a minor one. In the first book, internal conflicts were frequently isolated, moving forward in jerks and stops and resolved nearly as soon as they appeared. Sure, this was mildly irritating. But Sanderson always had a different replacement, and an equally interesting one--thus compensating for the fragmentation with variety (as opposed to meaningless repetition). And that variety produced a noticeable direction in which Sanderson's characters began to change.

In The Hero of Ages, it’s simply the same conflicts, repeatedly duplicated. Introduced, resolved, re-introduced, resolved, until those conflicts feel completely negated. It came to a point that I started skipping over pages of sheer angst, characters dismally moaning "why must fate do this to me???" only for them to harden their resolve and vow to overcome whatever obstacle stood their way a few paragraphs later. All of this, I suspect, was in an attempt to give some meaning to their struggles. But the only thing that resulted was a string of the same repeatedly negated conflicts. The repetitiveness of it all accomplished nothing but the removal of the very emotion Sanderson was trying to evoke.

On the other hand, the scope of the story and the plot’s conclusion was impressive. Or perhaps it was my absolute craving for the long-missing action that satisfied me more than it would have if the first 75% of the story had been written with as much flair and energy as the last quarter. I’d doubted Sanderson’s ability to write a conclusion that was not overly expository (like it was at the end of the first installment), partly because he hadn’t yet exhibited the skill, partly because he had so many subplots to wrap up. It was near the end when I finally saw all the questions raised from the prequels answered, the characters’ storylines coming to a close, the subplots satisfactorily integrated, and all so fluidly and effortlessly executed it very nearly changed my opinion of the book.

In spite of my annoyance with Sanderson's prose in general--which I would mostly describe as wooden, contrived, and expository--I like the way he handles the switch between different character perspectives. It's not particularly jarring despite the multiple cliffhangers, and perpetuates a very even flow from each subplot to the next, facilitating their eventual integration near the very end.


Now I’m wondering, is it just me, or is this trilogy becoming more and more symbolic since The Final Empire? I couldn’t help but feel in this book that Sanderson was beginning to isolate his characters as representatives of some entity or idea (perhaps to help him invoke different themes).

As a living man, Kelsier embodied the path to the end of people’s problems. As a martyr, he is the solution, as well as a saint. The latter is especially obvious because Sanderson begins referring to him by his epithet (the “Survivor”) more frequently than his name (almost as though to put distance between the reader and the character) and because the supporting characters often use him as a justification for their actions. He is almost larger than life—a person whose accomplishments could never be truly replicated, only followed and finished.

Similarly, Spook—a seemingly unremarkable individual—gains the ability to burn pewter, the metal that enhances physical strength. This new ability is a metaphor to his journey from an insignificant helper in Kelsier’s crew to someone extraordinary. His supernatural accomplishments following this transformation—such as jumping off a burning building with a child in his arms and being revered as the “Survivor of the Flames”—begin to define who he is.

But, interestingly enough, it seems like Sanderson subverts this “symbolism” nearly as often as he invokes it. Kelsier is only extraordinary to the people because he was once ordinary. Sanderson doesn’t take any pains to hide that much of what Kelsier represents is extremely flawed, pointing out the horrible things that arose from his prejudice against nobles, and the crimes “perpetuated in his name” (e.g. the repeated execution of nobles while secretly reserving the Allomancers). Spook gains power, fame, and reverence during the short period he gains his new ability, but it turns out in the end that it was all a ruse orchestrated by Ruin to manipulate Spook.

If you haven’t yet read The Hero of Ages, I highly doubt you’ll be as ambivalent as I am. From the looks of all the reviews on the front page and high average ratings, Sanderson’s flaws are easy to gloss over for most. And I partly agree: while The Hero of Ages made me want to tear my hear out fistful by fistful, it’s still a worthy read--if only for the ending.